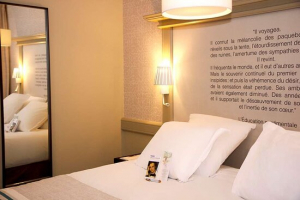 Rouen-in the Footsteps of FLAUBERT

Rouen is famous for its cathedral boasting the tallest steeple in France, its art museum with the largest collection of Impressionist paintings after the Musée d’Orsay, the site of Jeanne d’Arcs burning at the stake and the birthplace of Gustave Flaubert.

In celebration of Flaubert’s bicentennial I and colleagues of the APE (association de la Presse Etrangère) were invited to Rouen. After a quick (1 hour and 15 minutes train ride we arrived at our destination and a short walk to the Hotel Litteraire Gustave Flaubert  to soak up Flaubertian atmosphere. This small chain of hotels specializes in celebrating Proust, Rimbaud….

Tracing the footsteps of Flaubert we arrived at ‘his’ museum that also celebrates the work of his father, a well-known local physician. Next up was lunch at LES MARAICHERS. It was Saturday and the terrace, main dining room and  second floor were filled. Most diners were feasting on the plat du jour, Boeuf Bourguignon,  that was slightly salty from its sautéed lardons and perfect for the baskets of baguette that covered the table. The just released Beaujolais Nouveau was fruity and portends a good vintage when it matures.

It was a San Francisco like evening with fog and mist but it didn’t interfere with a lively theatrical performance inspired by Flaubert that filled the Parc André Maurois. READ MORE